If you've followed the posts on U.S. submarine chasers in post-war minesweeping duties in the North Sea, you've no doubt seen photos of chasers and U.S. Lapwing-class minesweepers in action or moored together. This month I've started a page on the minesweepers that the chasers served with -- or rather, behind, as the role of the chasers was to follow the minesweepers and shoot and sink any mines that floated to the surface.

Included in the new page, here, is a list of the minesweepers that served in the North Sea Minesweeping Division, along with their numbers and where known, the one- or two-letter hull marks. The hull marks can be especially useful in identifying minesweepers in photos, as it's often hard to make out the name. For example, in this photo, the first is USS Penguin, marked "PD." I'm hoping someone might have a reference to fill in those that are missing. "PK," for example, eludes me. 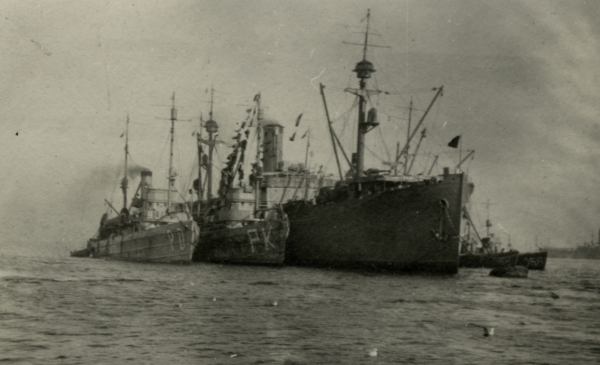 Minesweepers USS Penguin, AM-33 and another marked "PK" on the hull, alongside USS Black Hawk, with submarine chasers SC 48 and SC 256 visible on the right.

I've started a photo set on the page, including a number of Crosby cachets from my collection, where the photo is small, but the pieces seem interesting. More to come.