WWI submarine chaser hull markings were in the format "SC" + the chaser number, as in, "SC 93." This was painted on either side of the bow, and also on the crow's nest and bridge canvas, on life rings, and on the wherry; with many variations. For example, a few photos show very small hull numbers, and some later photos, such as in the post-war Northern Russia Expedition, show shadow characters, white with black shadows.

In many photos we see extra characters painted on the hull. Probably the best known of these is from the box art of the Glencoe chaser model, which shows SC 96 as "AV SC 96" - a designation that I'm almost certain that chaser never actually had.

These extra marks don't have any inherent meaning, and can't be used reliably to identify one chaser over another, without evidence of the hull number itself or something in the context of the photo. They were used to indicate positioning in convoys or local designations, and were temporary and not always unique to a particular chaser. For example, there are photos of the same chaser with different extra markings at different times and locations; and conversely, photos of the same extra mark on different chasers.

From the collection of Lt. (j.g.) George S. Dole, here is an example, a convoy plan issued by U.S.S. Leonidas (which would be mothership for the chasers stationed at Corfu, Greece, Base 25). The illustration accompanies the following notice:

1. You will immediately paint the letters or figures designated for your number in Convoy Train, on both sides of the bow, just abaft present SC number, both sides of bridge screen and across stern.

2. These letters and numbers should be painted in white.

3. The figures on bow will be 5 feet high and the lines 4 inches wide. on bridge screen 30" high and 3 inches wide, and those on the stern as large as possible. 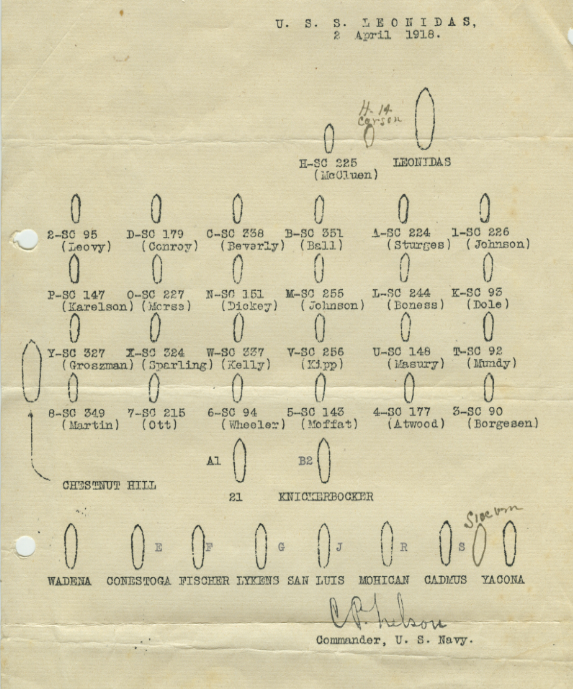 When looking at period photos, these extra characters can sometimes help in sorting/identifying location or time frame, but in identifying a specific chaser, you can’t always tell from just the large convoy markings. And a recommendation for model builders doing a project with the Glencoe model: Sand off the “AV SC 96” and paint whatever hull number you choose to depict. If you want to add extra marks, best to find photographic evidence of specific hull marks for a given chaser, if you want to be accurate.

Added this month to the Hull Numbers Collection: