On 6 April, 1917, the United States entered the war, and by May, 1918, 110-foot U.S. submarine chasers, built and fully armed for the new science of antisubmarine warfare, were heading overseas to join the barrage lines.

It was a massive undertaking, not just to design and build the boats—an effort that involved giving contracts to ship builders from coast to coast; not just to enlist and train officers and crews for hundreds of new commissions—but maybe even more than that, to design, test, and build the ASW devices the chasers would use in pursuing U-boats.

The science was new, and was invented on the fly: mechanical hydrophone devices such as the C-Tube hydrophone, for listening for the sounds of U-boat engines; the K-tube hydrophone, a version that employed microphones on a submerged frame and an ingenious compensator for determining the direction of detected sounds; and various devices like the Bearing Indicator (the large, lighted arrow on the flying bridge)—all invented for the sole, new purpose of detecting enemy submarines.

Much of this work was done by Boston-based Submarine Signal Company, at their testing facility at Nahant. Some of the photos from this facility show warehouses filled with experimental devices. (Some rare photos from a folio of images from the Raytheon archives are included in my book.) 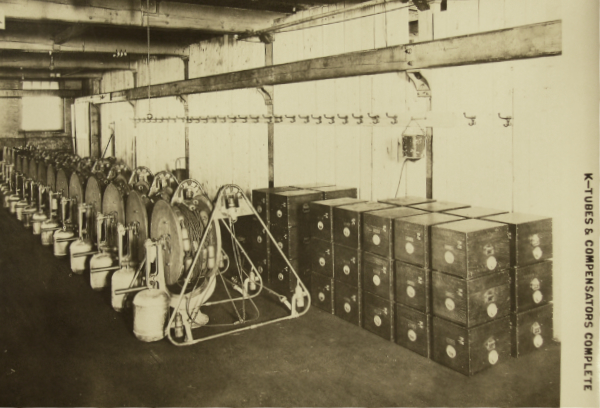 K-Tubes, at the Nahant facility. Photo courtesy of the Raytheon Company archives.

The chasers were slender, heavily armed wooden motorboats, the smallest commissioned vessels in the U.S. Navy. Of the hundreds built, 131 chasers would travel across the Atlantic Ocean under their own power, and spend the summer of 1918 hunting U-boats from bases in Plymouth, England; Corfu, Greece; and Queenstown (Cobh) Ireland. Along with the other ASW vessels on the barrage lines and in the convoys, chasers hampered and slowed down the U-boat, turning the tides on the submarine menace. It's in part to their credit that the war ended before the entire fleet of chasers had even been completed.

Added recently to the website are several photos from the collection of Henry “Harry” J. Trusselle, courtesy of his grandson, Jim Trusselle. Harry was one of the crewmen on the chaser in the post-war period, when SC 259 was on public exhibition. The USN made an effort to sell some of the chasers overseas, rather than bring them back to the United States.