Unit 22, comprised of submarine chasers SC 110, SC 44 and SC 46, was one of the units that served at Base 27 (Plymouth, England), and then in late August were assigned to Base 6 (Queenstown/Cobh, Ireland). Of the chaser units sent to Base 6, this was one of the more active, logging several pursuits and attacks in the last part of the war:

Early morning on 29 September 1918, Unit 22 detected a submarine at Lat. N 53° 44', Long. W 5° 47', and after losing sound contact, dropped a half dozen depth charges in an effort to force the submarine to reveal its location. Then in mid October, a radio report placed a submarine in the vicinity of SC 46, one of the wing boats of Unit 22, and the crew fired the Y-gun after spotting a periscope. Two more charges were dropped in the pursuit.

A report of an attack on 22 October 1918 includes details that by this time had become common: Oil came to the surface for a long time after the depth charges detonated. Early on, this was assumed to be due to hitting a submarine, but it was discovered fairly quickly that it meant no such thing. Even so, they followed the trail of the oil slick; but the submarine was not located again.

Another interesting aspect of the reports for this pursuit was that at one point SC 46 trailed for the submarine. This was done by unreeling phosphor-bronze wire with a weight on the end, and the other end connected to an attenuator that would show if the trailing wire struck a metal object. The chaser crews were trained to run back and forth across the suspected location, to try to detect a submarine "playing dead" on the ocean floor.

From the attack reports in Appendix III, Hunters of the Steel Sharks: The Submarine Chasers of WWI. 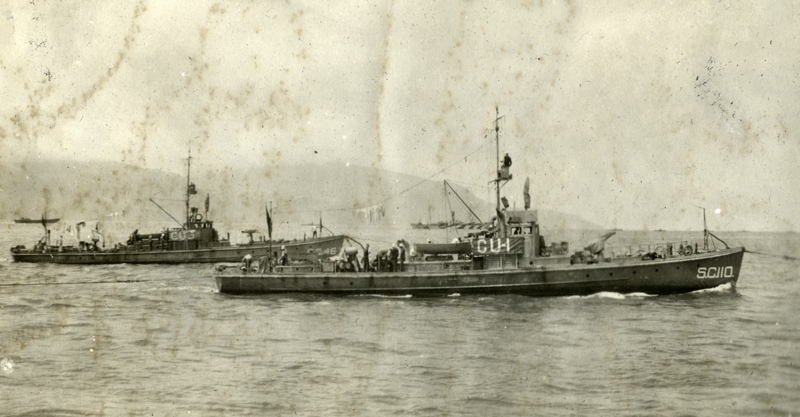 Photo: Submarine chasers SC 110 and SC 46 (From a collection of photos of a crewman of SC 254, courtesy of Laura Hawkins.)