I was going to talk this month about a couple of pursuits and attacks of Unit 4, Base 27: SC 36, SC 321 and SC 98. But something that came to mind as I was looking at Unit 4 is the seeming randomness of the chaser arrangements, in terms of which boats ended up where, and how the units were put together.

Occasionally I receive questions about hull details among chasers in the same unit, of the variety, "If I see a certain type of depth charge rack on one chaser in a unit, is it a safe bet that the others in the unit would have the same type?" Or it's about hull numbers in the same range: "If I see a sprung deck on SC 91, would I expect to see that on SC 92?" The short answer is, not really a safe bet, but maybe.

Since SC 91 and SC 92 were both built at Elco, for example, maybe SC 92 has a sprung deck also, but I wouldn't bet too much on it. And chasers in the same unit could have been built anywhere, and fitted with racks and other equipment at different locations.

Details like the type of rack or even what variety of deck gun the boat has is likely more a question of what was available at the time and location it was acquired. As for how a given trio of chasers ended up together in a unit, I suspect it was a matter of when the chasers were completed and commissioned, and which crews happened to be trained at the same time; and beyond that, a question of the available officers and who was in charge of making the assignments. Would love any thoughts on this, if I've missed a likely answer. Here are a few details, for Unit 4: 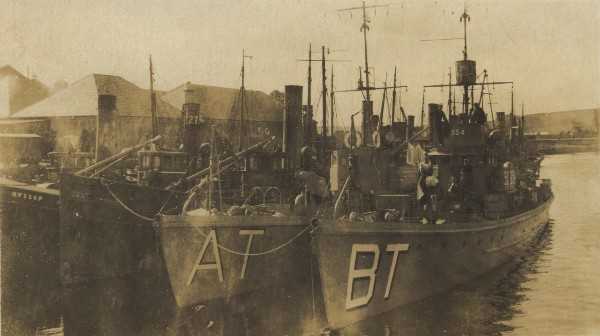 But, so that I don't entirely ignore the ongoing theme, I should note that there is a personal account of a pursuit and attack by this unit here, from a crewman on SC 36: https://www.subchaser.org/100-years/1918-september-2 .