Over the years I've fielded a lot of questions about the hull markings on chasers. Photos show various different sizes and styles of lettering, and mixture of letters and numbers in addition to the chaser's designation (such as SC 93). Last May I posted a scan of a convoy arrangement that shows the position designations for the subchasers and other vessels in a convoy led by USS Leonidas from Bermuda in April, 1918.

I thought I'd add a bit to that. Here's the document referenced in that post, the orders to paint the convoy markings on the subchaser hulls. In this case, the characters were to be five feet high with lines four inches wide. 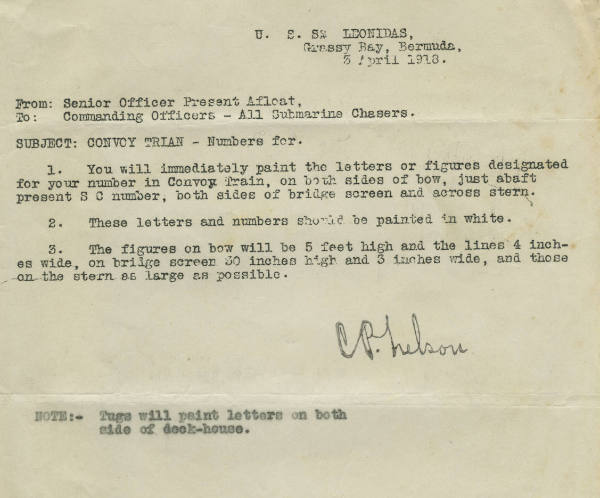 Note, however, that these hull markings were not unique to specific chasers. To know for sure which boat you're looking at (without being able to read the hull number, I mean), you have to know at least roughly the time and place. You can't assume, for example, that any shot of a chaser marked "X" shows SC 324. If you come across WWI-era chaser photos with hull markings and can't read the hull number, let me know; I might be able to identify which chaser it is.