My plan for the Subchaser Archives Notes in 2020 is to highlight some of the U.S. submarine chasers units that served overseas in WWI. This is on my mind as I work on the research for a book on subchasers overseas, but also it's a rich source of materials for short, interesting stories.
I'll start things of with:

Unit A arrived at Corfu in the first week of June, 1918, and soon was in service on the Otranto Barrage. Unit A participated in a couple of notable incidents. In the first, on 19 July 1918, there was a reported sighting of a submarine on the surface, and the unit pursued and attacked with depth charges. The second, on 8 September 1918, was longer pursuit, a five-hour chase with depth charges dropped and Italian sea planes participating by searching the hunt area for evidence. Neither resulted in a confirmed sinking.
One of the crewmen of SC 125, Henry "Harry" Tegler, kept a log of his experiences, and also journals and documents from his days training as a radio electrician.
Here's a snippet from his personal diary, on the September incident:
"About 2:30 we were in about the right position, the cross came down. 4 shrill blasts as each chaser sounded as four cans were tipped off the back of each and the Y-gun fired. 18 depth charges in all. The chasers spread, 127 turning to port, 124 dead ahead and we to the starboard at full speed as can after can reached its depth and exploded. It was surely a thrilling sight ..."
The formation he describes was the standard attack maneuver for a unit of chasers: Depth charges ("cans") would be dropped off the stern, then the chasers would spread, the unit leader running directly ahead while the others turned away; and the Y-guns would then be fired -- the objective being to carpet the area of the detected submarine sound with charges. 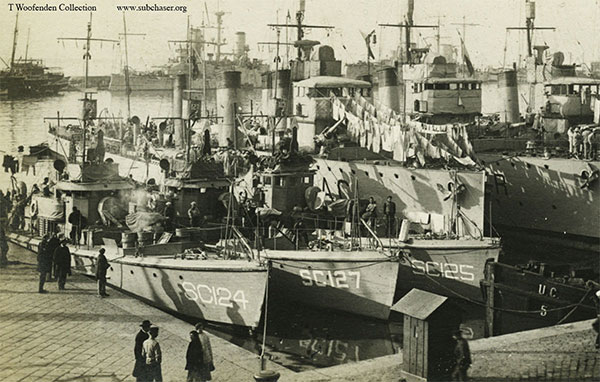 Photo: The chaser unit at Fiume. This is a photo in my personal collection showing a slightly different view of the scene in the National Archives image here. Immediately after the Armistice, many of the subchasers that were stationed at Corfu (Base 25) were sent up the coast of the Adriatic Sea to represent the interests of the U.S., essentially to show a U.S. presence there, and to be ready to take over ships as needed.
Next months we'll take a brief look at a unit at Plymouth or Queenstown.
--Todd Woofenden, editor