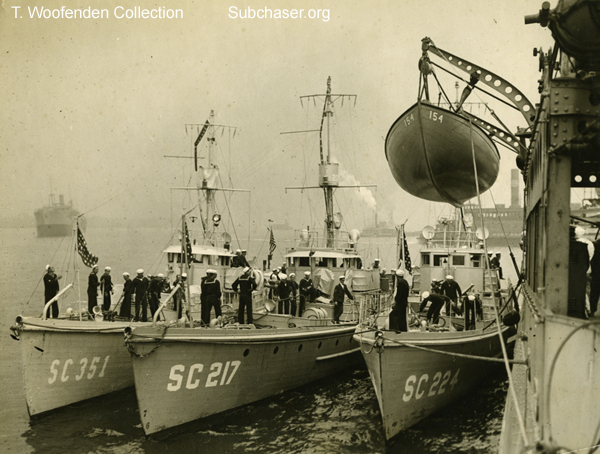 This was one of three units (along with Unit 6 and Unit 10) involved in one of the more written-about news stories on U.S. submarine chasers in WWI. At 11:45 a.m. on 6 September, 1918, sound contact was made, and Unit 2 attacked, dropping nine depth charges. Sound contact was once again made, and Unit 2 dropped eight more depth charges. SC 226 was damaged in the attack, in what appears to be a case of the Y-gun not sending the charge far enough off the side. The explosion took the engines out of commission, and the chaser had to be towed to base.

The story gets more interesting later on, with a continued pursuit and more charges dropped:

The chase continued until about 6:00 p.m., with units 6 and 10 dropping charges ahead of and behind the detected location of the submarine. Bottoming noises were then detected at times for several hours. The following day chasers remained near the site, but no further sound contact was made. In several unconfirmed reports and later accounts of this incident, listeners are reported to have detected revolver shots after the attack, interpreted as a case of submarine crewmen committing suicide; however there is no mention of this in the Base 27 subchaser war diary. In one unconfirmed report of the incident, crewman Thomas G. Sweet of SC 260 claims that the submarine targeted in this incident was later raised by the British.

From Hunters of the Steel Sharks, The Submarine Chasers of WWI, page 187.

The story that arose from this incident, of a U-boat sunk by chasers and its crew committing suicide at the prospect of their impending death, shows up in various newspaper accounts and books. My read on it is that this was a case of an idea of what might have happened blooming into a bigger story in the retelling. As noted in Hunters, the official report in the Base 27 War Diary makes no mention of gunshots or the suicide theory; nor do any other contemporaneous, official reports. That said, it's one of the stories of WWI subchasers that made its way into the unofficial record.

Added this month to the Hull Numbers Collection:

More to come from that collection, including some minesweeping shots.