A star on the mast of an ASW vessel represented a submarine kill, and SC 129 displayed a star. (See photo here.)

Unit B certainly saw some action. Unit leader SC 215, under the command of Lt. (j.g.) Wildon A. Ott, Unit B, had engaged in hunts with wing boats SC 128 and SC 129 on the Otranto Barrage. Chasers joined the barrage line in hunting units of three chasers, a unit leader and a pair of wing boats.

Near the end of the war, the unit was among a total of eleven chasers that participated in the bombardment of Durazzo harbor. Ensign Hilary R. Chambers, USNRF, CO of SC 128, published a small, rare book, United States Submarine Chasers, recounting his experiences.  Here's an excerpt describing the attack on a submarine by wing boat SC 129, under the command of Ensign Maclear Jacoby, USNRF:

"As soon as the cruisers had started firing the forts on shore opened up with a great roar, and we could see big splashes of flame along the cliffs over the sandy shore. The airplanes were doing remarkably effective bombing, and we were watching the fight with lots of interest, zigzagging along our patrol. While the armored cruisers were bombarding, the light cruisers stood to the northward along the coast and past us as though they meant to proceed against Catarro, an Austrian and German submarine base. One of their escorting destroyers ran in near the beach, and swinging her stern around let go a shot at the forts. Then, putting their helms hard over the big ships swung around to go on to their bombarding sector. At this maneuver the northern forts opened up, and shells fell around us. We little chaser men were greatly thrilled and were as proud as could be, for we thought at the time the Austrians considered us of enough importance to send nine-inch shells at us. We ignored the fact that it was the cruisers beyond that warranted the whistle and dull splash of these big projectiles. The expression of our elation over our own imagined importance was suddenly interrupted by a report of the S. C. 129 that there was a submarine off our port bow.

The 129 was the last boat in our unit and set off after the submarine she saw, just as our leader the 215 and we saw another. These subs, when the light cruisers had started north, had evidently set out after them, and when they turned back to the southward they had stuck their periscopes up to see what was going on. They did not seem to pay the least attention to us, but had their eyes on the bigger game.

The second shot from the 215's three-inch gun hit the periscope of the second submarine about 750 yards away and a big column of water and compressed air shot up six feet from the surface. The submarine kept going, however, as such a shot does not put them out of business. The escaping air from the periscope left a trail on the water and 128, maneuvering to the starboard side of the 215, got him right between us (we were now one hundred yards apart), and we let go fourteen bombs with the result that up came pieces of the underwater craft. We did not stop to pick up evidence, however, as a third submarine was then reported by 129. Meanwhile 129 had set off to intercept the sub. she saw 1600 yards distant. The periscope had not been seen for about a minute, which is a long time under such circumstances, when the executive officer stepped on the whistle, which is a signal to drop a depth charge. At the explosion of this charge, up came both periscopes of the submarine to see what had so jarred its peaceful progress. This gave the submarine's exact bearing to the chaser, and although the bomb had crippled the chaser's engine, in this condition she kept going and was able to intercept the course of the U boat, where she let go enough depth charges to entirely destroy the submarine."

The Durazzo bombardment received a lot of press, and SC 129 put a star on the mast--although a more calm historical consideration suggests that the base had been mostly abandoned already; and no U.S. submarine chasers were officially credited with a kill. Nonetheless, it was an interesting naval engagement, and the officers and crew who served in Unit B went home with stories to tell. 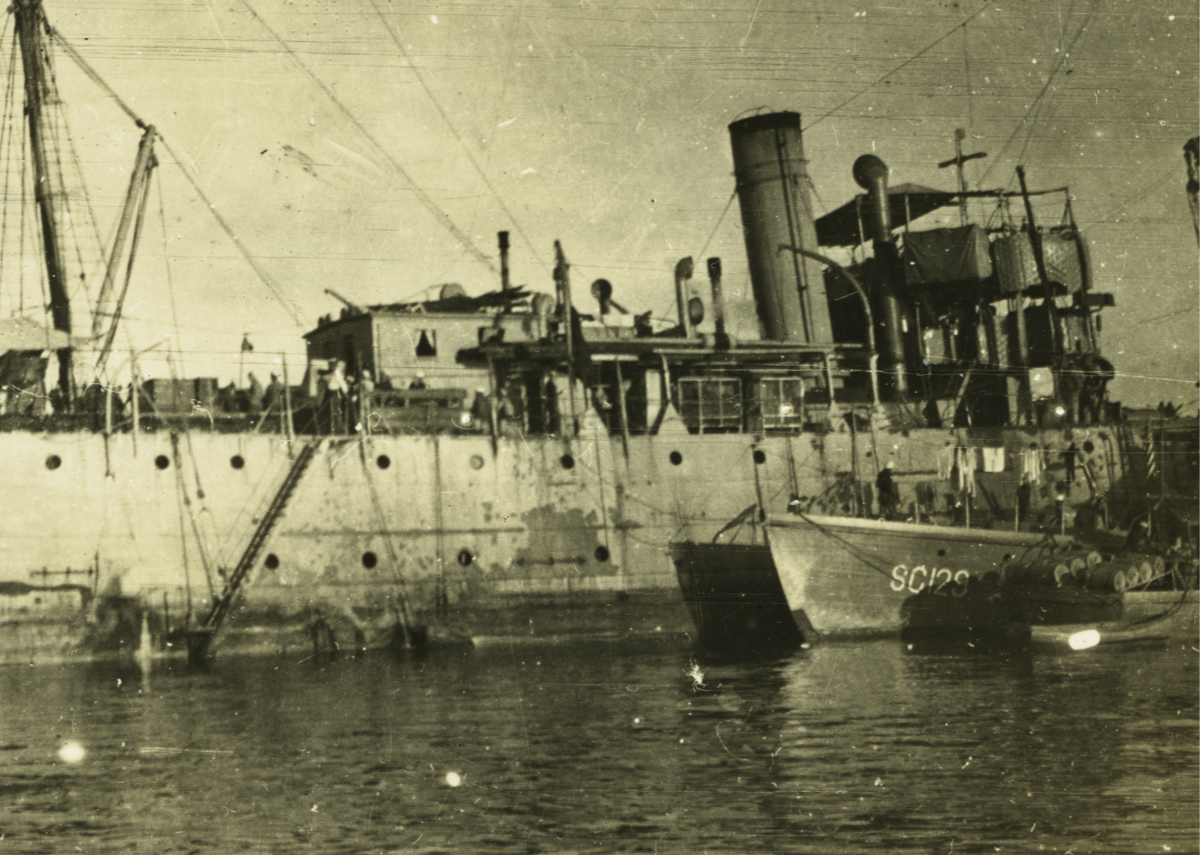 Resources:
* See full text of United States Submarine Chasers, captured and cleaned up. Chapter X - Durazzo covers this incident. There are no photos or illustrations.
* Also see rare photos of ships engaged in the bombardment, here and in Chapter 5 of my book, Hunters of the Steel Sharks, the Submarine Chasers of WWI.
* CO Maclear Jacoby's account is included in the book, Cinderellas of the Fleet, which is essentially a marketing piece by Standard Motor Construction Company, so don't take it too seriously--but the stories are engaging.