The C-Tube hydrophones used on submarine chasers in WWI (and the topic of last month's notes) were built by Submarine Signal Company, and were tested off Nahant (near Boston). This month is an example test chart from the archives of the Raytheon company. The C-Tube hydrophone was mounted on a test vessel, Margaret, and submarine L-11 (SS-51) ran submerged as the target. Caption reads as follows: 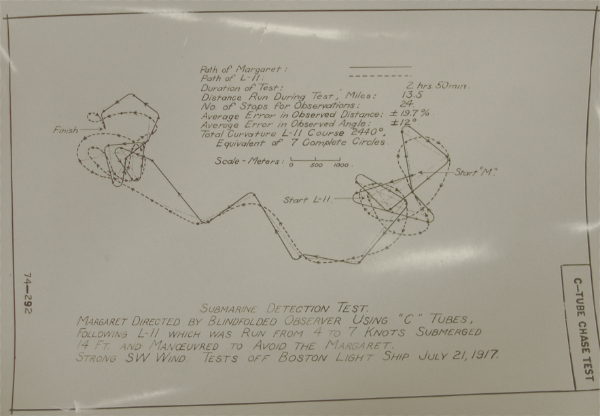 The result looks pretty good. But in live ASW operations, it wasn't quite this simple. The Listeners on the chasers might identify the direction of the sound of a submarine, and by operating in three-chaser units, they could collect multiple detections and the Unit Leader could triangulate the sub's location. But they had no method for determining the depth. As depth charges were set to detonate based on a depth setting, there was an element of guesswork involved in the attack.

Factoring in rough seas, noise from other vessels, and human error, it's not surprising that the typical pursuit didn't result in a kill. On the other hand, the prospect of hundreds of pounds of TNT exploding anywhere near a submarine created a deterrent effect, and hampered the U-boat's ability to travel to sea lanes. The combined impact of U.S. chasers and other ASW vessels working the barrage lines was a significant reduction in U-boat attacks.