A remarkable aspect of the history of U.S. submarine chasers in WWI is the timetable. The U.S. formally entered the war on 6 April 1917. A mere month earlier, on 4 March 1917, the U.S. government issued plans to build a fleet of subchasers; and before the end of the year, completed vessels were being commissioned and readied for war.

Submarine Chaser SC 93, for example, was delivered to the Brooklyn Navy Yard in New York, and was commissioned in December 1917,* one of many hastily built, hastily delivered, miniature war ships. These were single-hulled, wooden motorboats that would need to be hauled out of the water periodically to seal leaky seams. Steel was in short supply and was needed for the construction of larger vessels.

* Hunters of the Steel Sharks: The Submarine Chasers of WWI, Woofenden, p. 13-14.

Moreover, the sheer number of boats ordered required that the contracts be spread out among many boat builders across the country. In some cases, a local boat builder would have a contract to build just two or four of them, presumably that being the largest order they could handle in the expected time frame. The differences among manufacturers led to many minor construction differences from one boat to another, such as some boats having straight-laid decks and others "sprung" decks. 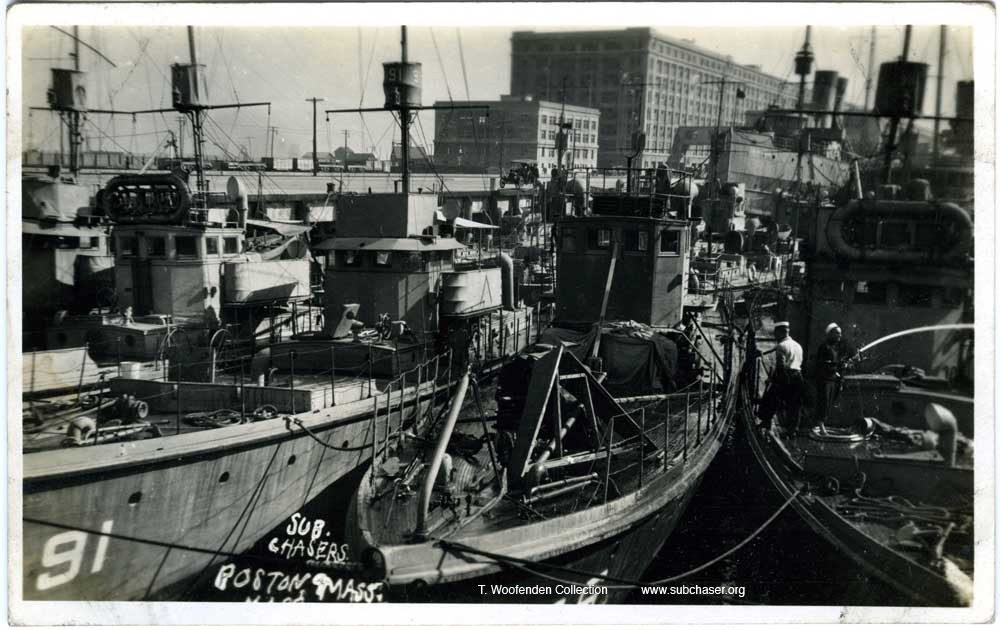 SC. 91 at Boston, one of the chasers assigned to Base 27, Plymouth, England, showing sprung deck.

And so as Lt. Dole (SC 93) and other newly minted officers took command of a newly built fleet, they were faced not only with learning the formative tactics of antisubmarine warfare, but handling a new type of vessel, keeping their crews from freezing to death during training in the coldest winter on record, getting the boats provisioned, and preparing a crew of young men to cross the ocean in wooden motorboats and join the barrage lines.

One year from the official authorization to build the fleet, U.S. chasers were built, tested, armed, provisioned, manned, and heading overseas.