In reading colorful accounts of submarine hunts in WWI, it's easy to lose track of just how new the science behind antisubmarine warfare was, in 1918. The U.S. submarine chasers were fitted with state-of-the-art equipment including SC-Tube hydrophones (a variation of the C-Tube), K-Tube electronic hydrophones, and brand new radio telephones that even many of the large warships did not have.

But consider the scale of things. The chasers were 110-foot wooden motorboats operating in units of three, working to prevent U-boats from making it to open ocean. This meant, along with the other ASW craft, patrolling enormous swaths of ocean, armed with new, experimental, and by modern standards rudimentary, equipment.

The Listening Log provides a good visual. Imagine a Listener in the magazine, a small below decks space where the top end of the SC-Tube was located (see the illustration on pages 18-19 of my book and the photo on the site, here). He's listening for the sound of U-boat propellers, trying to distinguish enemy submarines from various other ships, and rotating the hydrophone to try to determine the bearing of a detected sound. When he hears a notable sound, he records it in the Listening Log, an example of which is shown here: 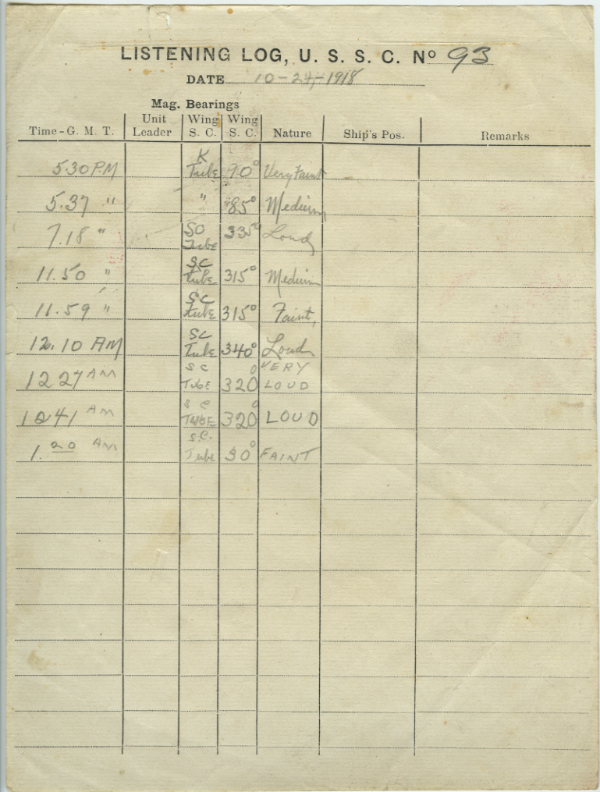 Listening Log. This one is from SC 93, in the aftermath of the hunt described in the prologue of my book.

Not only is the bearing rough-and-ready, but the Listener must be careful to avoid being 180 degrees off: The sound might be ahead or behind. Only by careful use of the Tubes can he be sure to get it right. Next, an officer in the Unit Leader of the three-chaser unit must collect the reports from each boat, and based on the reported bearings, triangulate the location of the sub.

The wide pattern of depth charges in a standard attack was designed to cover a lot of ocean, to account for uncertainty around the actual location of the U-boat. It's unsurprising that a successful attack was unlikely; but it's also not the whole story: Kills or no kills, the deterrent effect of the U.S. chasers and other ASW vessels hunting on the barrage lines has been well documented.