This month, a pursuit and attack report, as recorded in the War Diary of Subchaser Detachment Three, Base 6, Queenstown (Cobh), Ireland. The chasers are those of Unit 18, SC 91, SC 221 and SC 222. This particular report captures a number of common themes in WWI chaser attacks, including:

At 6:40 a.m. October 13th, 51.20 N. 7 W. the S.C. 91 heading south sighted a periscope about 30 feet off the starboard bow and about 50 feet ahead of the ship, crossing her bow in an easterly direction. The #91 immediately advised the other ship by 'phone and got underway, dropping depth charges as follows: Starting at the spot where periscope submerged and following course of submarine. One charge off the stern, 15 seconds later another charge off the stern, 15 seconds late fired the "Y" gun, and 15 later another charge off the stern. The #221 and #222 were respectively 500 and 800 yards to the southeast of #91.

After charges were dropped the #91 stopped, put down the tubes and listened. There was heard a swishing sound, which was also reported by the #221. The #222 reported that her tubes were out of commission from the explosion. The bearings of the #91 and #222 did not give any fix. A few minutes after the explosion distinct sounds of hammering were reported for a very brief interval. The swishing sound grew fainter and in a few minutes stopped altogether; this sound was dissimilar and unrecognized by any of the listeners.

On report of sighting periscope ahead the #221 dropped one depth charge in that general direction. The #222 was then called over and placed three hundred yards to the northward of the #91 and all boats listened attentively, the #222 having reported that the "K" tube and MB tube were again in working order. No further sound were heard though the listeners were asked this specific question. At 10:30 a.m. having heard no noises the unit got underway and took up running hunt without result.

Weather conditions were ideal. There was practically no wind or sea, visibility was high and there was absolutely no interference. Accuracy of sound bearings was of practically no value due to the condition of the listening apparatus. All during the night there were reports of suspicious sounds, but no fix could be obtained, nor could the sound be actually identified. But for the actual sighting of the periscope the submarine would undoubtedly been missed altogether. The performance of the personnel was good and the total ammunition expended was six charges. 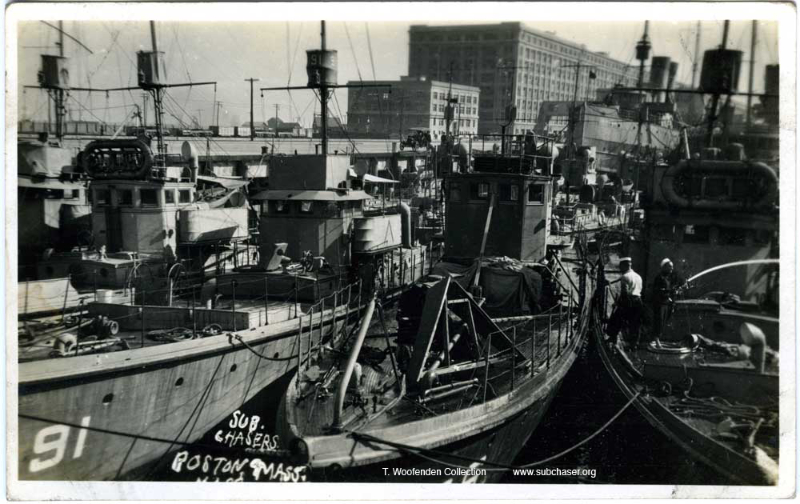 Although they couldn't claim a submarine kill, the subchasers of Unit 18 went home with stories to tell.