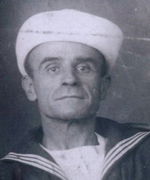 October 2008 Machinist's Mate John Fabris earned the Navy Cross for his actions in the bombardment of Durazzo Harbor on 2 October 1918, when he kept an engine of SC 179 running by holding a part in place even though it resulted in a severe burn.

While most chaser commanding officers received the Navy Cross, Fabris is one of very few crewmen to receive the honor.

An interesting source that mentions this incident is a novel by chaser crewman Alfred Loomis, Walt Henley Overseas, a fictional account of experiences on a chaser. In the book notes, Loomis credits John Fabris as the machinist's mate in that incident.

A portrait photo of John Fabris, submitted by Gene Hultgreen, has been added to the Chaser Crews section of the site.

(See a photo set of the bombardment of Durazzo here. And read Hilary Chambers' account here.)