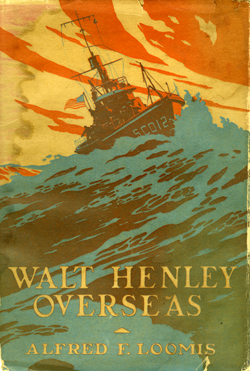 Alfred Loomis was a notable subchaser crewman (SC 78), and later in life a notable yachtsman and writer.

This book is a work of youth fiction, but is based on his experiences on chasers in WWI, and for that reason, worth a look.

The story is fairly standard: an unpolished chaser crew crosses the ocean to fight U-boats at Otranto. Their captain is loved, the Exec. is a tyrant, and hijinks ensue.

The real fun is in the little details of chaser life that Loomis reveals. For example, as the chasers arrive in American Bay -- the primitive cove at Fustipidima Point, Corfu, Greece -- he notes that the land owner leased the cove to the U.S. Navy on the condition that none of the ancient olive trees be cut down or damaged. Loomis notes that as a result, the various small barracks and other buildings were scattered around in what seemed a disorderly fashion, tucked under olive trees here and there, not the neat rows of buildings and tents one would expect to find at a USN base.

Loomis devotes a short chapter (all the chapters are short) to the bombardment of Durazzo Harbor in October 1918, an account that can be entirely dismissed except for the descriptions of the crewmen's sense of the affair and a few of the details. In the Author's Notes, Loomis offers credit to John Fabris, MM 1c on SC 179, for one detail in this chapter: A crewman in a pinch when the chaser was in danger kept an engine running by holding the spring in place with his hand, severely burning himself but helping to get the chaser out of harm's way. This did happen, and for this act John Fabris was awarded the Navy Cross -- very rare, for an enlisted man.

By and large, pay attention to the atmosphere Loomis paints, as it is probably accurate. The events, while generalized, modified and in some cases exaggerated, are probably about the kind of thing that actually took place. There are at least a few events that merit a little research, to see if something like this actually happened.