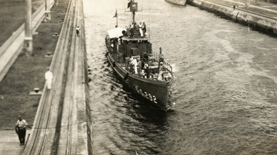 SC 292 was commissioned at Puget Sound on 27 March 1918. The chaser was one of a group that traversed the Panama Canal in June 1918, bound for to the NY area. During the war, SC 292 was assigned to the Third Naval District, and performed patrol duties along the east coast of the U.S.

After the war most of the submarine chasers were decommissioned and sold. A group of those that had been built at Bremerton were sent back to the Pacific coast, requiring another journey through the Panama Canal.

For other Panama Canal photos, see the set from the collection of James Everett Parks of SC 297. Also see SC 287 and SC 289 at Balboa.

Collection of William B. May. Thanks to Penny Thompson, his daughter, for sending in the photo scans.