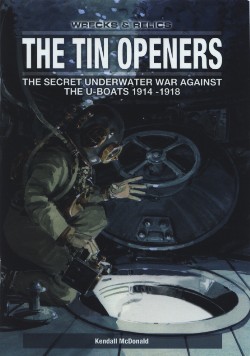 Contemporary diver Kendall McDonald describes a number of wartime dives to recover documents from sunken U-boats in WWI. This is a short, fast read, a small booklet of 33 pages. McDonald tells the story of diver Ernest Charles "Dusty" Miller, working for the British Admiralty to dive the U-Boats and locate and recover the metal boxes containing German military codes, maps of mine fields, and other intelligence.

McDonald gives a good sense of the process of diving these wrecks and the wartime intelligence value of the documents on board, but it is not a work about the intelligence documents per se. The codes and maps are mentioned, and their general strategic value noted, but this is the story of the dives, of what it was like to arrive on the scene, in some cases mere days after the sinking of a U-boat, and to enter the vessel in search of secret enemy documents.

A number of specific dives are described, including:

The booklet is available from the Historic Military Press web site.