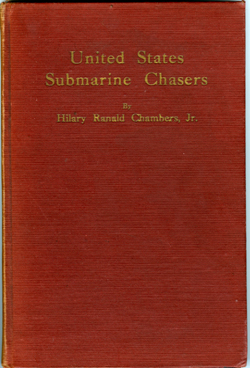 Chambers served as commanding officer of SC 128, stationed at Corfu, Greece. His unit participated in the Otranto Barrage, and took part in the Durazzo engagement on 2 October 1918. This rather short book tells of his time on the chaser, mostly in straightforward narrative but with touches of dry humor. He includes a ten-page account of the Durazzo bombardment, which covers some of the elements that show up in other versions of this event.

At a mere 91 pages, Chambers' book is a quick read (One can read it cover to cover in one sitting), and although it provides fewer anecdotes of the experiences of the men on the chasers, it adds to the overall story.

This is a very rare book. But before spending $150 or more for a copy at an online used book seller, you might try tracking the title on eBay. My copy, only the second one I'd seen listed in a couple of years, was $10, which seems worth the wait.

In the meantime, the complete text of the book is online in the Subchaser Stories section of this site.