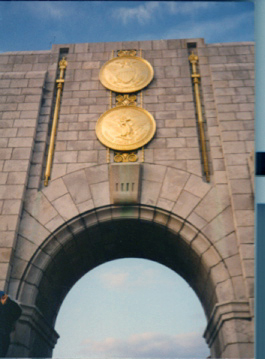 Seventy-five years is a long time to remember “all the Achievements and Comradeship of the American and British Navies,” but that is what the applied lettering says on the Victory Arch erected in 1932 in Gibraltar, designed by the great French Architect Paul Philip Cret in 1930 from Cret’s new office in Philadelphia. Cret designed cemeteries, triumphal arches and facilities for the American Battle
Monuments Commission.

What did the Americans have to share with the British? We are told in view of the fact the American navy was late in entering the war it was quick to respond. At the request of the Allied Naval Council, 135 of the subchasers vessels were sent to European waters with a view to operating in three large groups. One group based on Queenstown was assigned to the Irish Sea, another group was based on Plymouth for operations in the English Channel, and a third group was sent to Corfu to assist the then-existing mobile barrage of surface vessels, which had been maintained for sometime in the Strait of Otranto with the idea of restricting the passage of submarines to and from their Adriatic bases.

The passage of these small vessels, only 110 feet long, across the Atlantic Ocean was in itself a difficult undertaking, more especially since the demand for experienced personnel had made it necessary to man them with officers and men, many of whom had never been to sea before. The subchaser crews contained probably less that 1 per cent of graduates of Annapolis and less than 5 per cent of experienced sailors.

My dad was the only doctor for the entire fleet. His favorite complaint was the treatment of seasickness. Often the entire ships crew, including the officers were treated for the same sickness: seasickness.

Time has a way of forgetting the days long ago. My search in 1987 for “American Bay” and all that remained of the subchasers in Corfu was met with ignorance on Corfu. Not only did our questions about World War I fall on deaf ears, but questions about World War II also were not answered. Time had passed and all had been forgotten. We live for today and have no memory of time gone by.

From Leon Clemmer, son of physician Lt. Leon Clemmer who served on USS Leonidas, mother ship of the submarine chaser fleet at Corfu. See also the set of photographs from the service of Lt. Clemmer