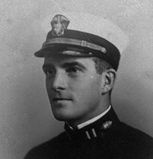 Lt.(jg) Leon Clemmer served as Assistant Surgeon on USS Leonidas, the mother ship of the submarine chaser fleet at Corfu, Greece. The photographs in this group are courtesy of his son, Leon Clemmer. The accompanying information is from a set of typescript documents, also submitted to the Subchaser Archives by Leon Clemmer.

Having completed his internship, Dr. Leon Clemmer enlisted in the U.S. Navy at age 28. In addition to his talents as a physician, Dr. Clemmer spoke German, a talent that would prove a valuable asset in his tour of duty on USS Leonidas, in translating German communications.

After short assignments on USS Hannibal and USS Tallahassee, Dr. Clemmer was assigned to USS Leonidas, and would remain with that ship for the duration of the war.