In mid-September 1918, chasers deployed depth charges in Bantry Bay after detecting engine sounds on the hydrophones. Later it was determined that the rock formations in the bay created an echo effect, and that no submarine was in the vicinity. With a bit of humor, the incident was dubbed, The Battle of Bantry Bay. From the war diary of Subchaser Detachment Three: Today Division 20 bombed a well-defined and accurately fixed propeller sound which subsequently proved to be an echo. The report of the Division Commander, Lt. (jg) Thomas Robins, U.S.N., is quoted in part. “At approximately 0220 G.M.T. September 11, 1918, Unit 22 made contact with a sound near south shore of Bantry Bay opposite the entrance of Berehaven; Unit 21 went to their support. The sound was centered and fourteen depth charges dropped at 2345 G.M.T. No oil or air bubbles were brought to the surface. Later information proved the noise to be an echo produced by a peculiar formation of rock. West Wind, force four; choppy sea. When sound contact was made September 11, 1918, the two Units were disposed so as to bring the sound between the two. The source of sound was then centered and attack made by four ships in line, distance 200 yards. Charges were dropped off the stern at 400 yard interval. Fourteen charges were used; three failing to function. Failure of charges to function was not due to lack of water. “Y” guns were not used. Throughout the contact, water noise interfered with the perfect use of the tubes. The wireless telephone proved entirely satisfactory; the operators on some chasers must be impressed with the necessity of sharp tuning.”

Another photograph from the same incident. A print of this photo also appears in the collection of Henry Miller, Listener on subchaser SC 208. On the back, Henry wrote, "An ash can shot at a hundred and fifty feet deep at a sub. They hovered along the shore in just such places for safety thinking we wouldn't find them." (Henry Miller collection photos and notes appear courtesy of Bobbie Miller, daughter-in-law of Henry Miller.) 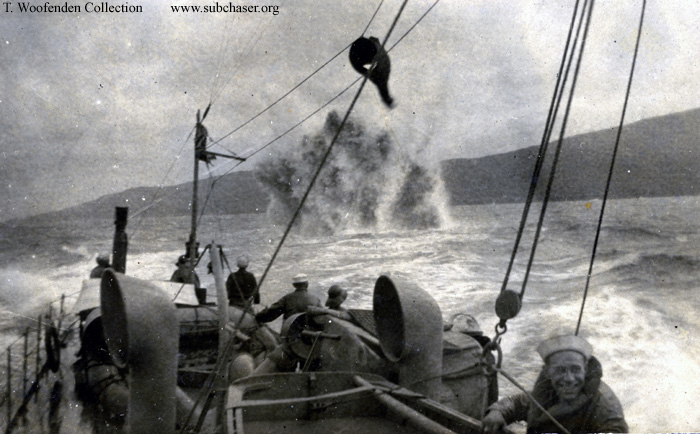