Submarine chaser SC 208, crossing from Bermuda to the Azores.

Caption: "taking a few rolls coming across from Bem. to the Azores. See the water coming over the side. The Exec. is looking up from the wherry."

The wherry is shown here covered with canvas, and ready to be raised by the boom off the main mast. Some of the chasers were fitted with sails at Bermuda. From the official report, "Summary of Cruise, USS Leonidas and Submarine Chasers from New York to Corfu, Greece":

While at Bermuda ten sails were made for the chasers, using all available canvas. There is only room for one sail without seriously interfering with chasing equipment. This sail is not comely, but is a great aid as a steadying sail and with a strong wind would probably drive the chaser at from two to three knots speed in case of disablement. It is salamandered to the mast from bridge deck to bottom of crow's nest. The foot is sheeted home to Y gun loading davit and the peak hauls out to the end of boom for hoisting out wherry, this acting as a sprit...."
National Archives, Washington, D.C.

Note the depth charges mounted to the Y-gun. The crew was ready for action. 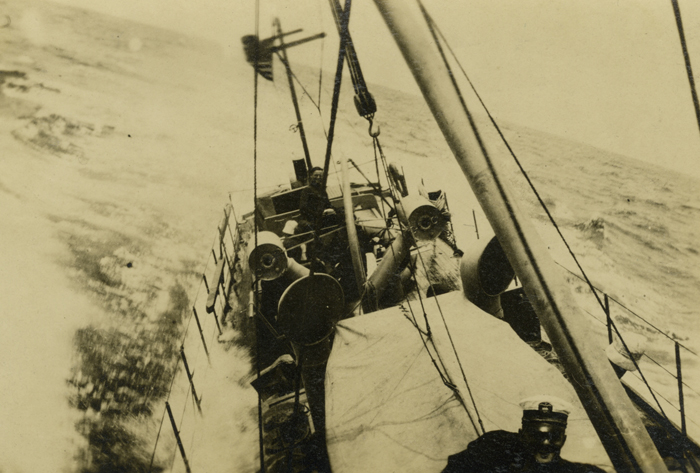