Riordan Goodwin submitted this image of the Ringo subchaser model, the issue prior to the Glencoe issue. 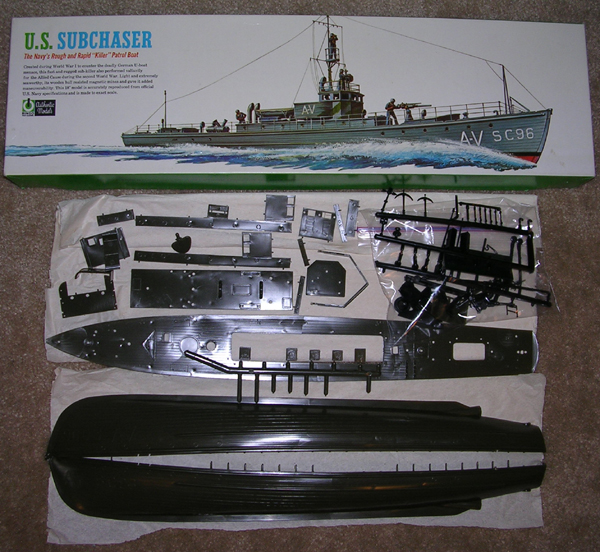 Here are the photos of the early issue Ringo Toy Co. (ITC) WWI “U.S. Subchaser” (kit # C582/200) I’m currently working on. This was reissued by Glencoe in the 1990s, but has become exceedingly rare. I got tired of trying to get one at a good price and blew $40 at a model swap meet– a bit more than the going rate on eBay. If I’d looked at it a bit more closely, I would’ve haggled a bit more, as this is missing the paper signal flag sheet.

Note stubby overscale railing stanchions on port hull half – I’ve shaved them off the starboard side. While generally accurate in outline, proportion and detail, there is much room for improvement in virtually all the fittings and equipment of this kit. The vent cowls are passable (they were actually made in segments) but may be a bit undersized and need their rim ‘lips’ reduced or removed. The Poole gun is a fair approximation but unfortunately molded as ovals rather than cylindrical in cross-section, so will need a new barrel at the very least (it appears that at least some WWI chasers may have been armed with Davis guns or old 3-pounder/47mm guns). The ‘ash cans’ (depth charges) are OK, but protruding detail on the ends is inaccurate.

The kit was originally designed as a motorized model (although no motor or battery box is included in this issue - the entire deck is intended to be removable), so has a clunky cylinder with a yawning hole at the central shaft position and one exceptionally poorly molded/inaccurate prop which is to be glued in the hole. No other props or shafts are provided. The lack of a molded water line and molded-on hull ID letters/numbers which cross raised planking detail will require the development of new modeling skills.

The hull, deck house and pilot house mating surfaces need to be planed off with sandpaper on a flat surface – extensive, repeated dry-fitting is essential, especially for a good fit on an ancient (1950s-1960s) kit like this one. The bow (tow line?) guide hole needs to be drilled out after hull is assembled, the warped mast will have to be straightened or replaced, numerous sinkholes in really awkward places will need filling, and the sunken-in deck locker sides will need filler or thin card. Also, windows will have to be cut from acetate or other suitable material and attached to the inside of the pilot house.Two-sided scotch tape might be best for this. Pilot house lacks the window molding (easily added with strip styrene) and roof railing/canvas depicted in photographs. Thinly molded ladder should be sanded off the back side and scratch built, door edge should be scribed and some detail (at least a wheel and a binnacle) should be added to the interior. Many photos also show a wraparound (presumably canvas) awning over the pilot house windows.

The good news is this kit will probably go together fairly easily for the novice and provides and excellent basis for those of us with Advanced Modeler’s Syndrome to accurize and superdetail ourselves to standstill. If you stumble across one of these kits in any issue, remember the pricing unfortunately reflects its ‘collectible’ rarity…