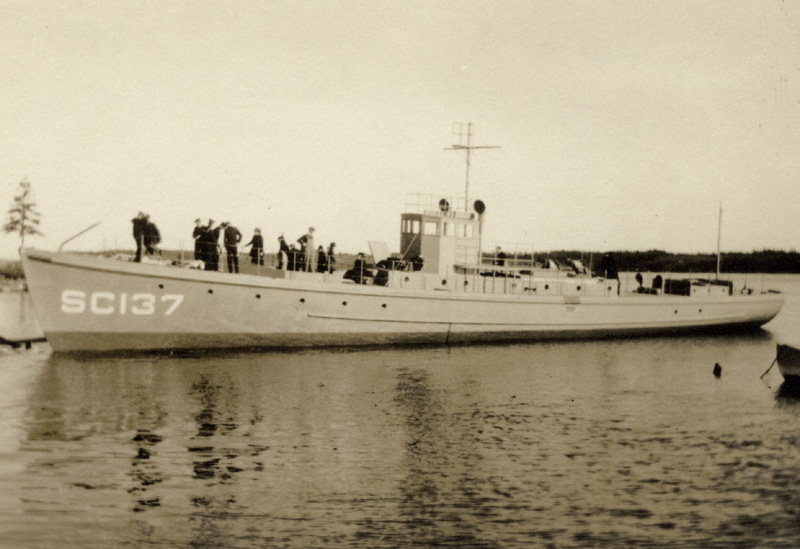 Image from the collection of the Boothbay Region Historical Society.

Of the 303 chasers in the U.S.N. war time fleet, 133 were assigned to overseas duties, SC 137 among them. The crossing, for chasers, was broken into several runs, as chasers were too small and carried to little fuel to accomplish the crossing without stops. SC 137 left New London on 25 April 1918, one of eighteen in the fifth convoy of chasers. Convoyed by USS Prairie, these chasers reached Bermuda on 29 April 1918. The next stop was Ponta Delgada, Azores, a nine-day run; followed by a seven day run from Ponta Delgada to Brest, France.

SC 137 was assigned to the Submarine Chaser Detachment One, based at Plymouth, England, and arrived at the base on 12 June 1918. Chasers engaging in active ASW operations worked in units of three boats. SC 137 was unit leader of Unit 6 (SC 137, SC 258 and SC 41). As commander of the unit leader, The CO of SC 137 was responsible for coordinating the hunts, pursuits and attacks of Unit 6. Unit 6 remained at Plymouth for the duration of the war, engaging in ASW operations.

See the book, Hunters of the Steel Sharks: The Submarine Chasers of WWI, pages 187-188 for accounts of two attacks in which SC 137 was involved. Following the war, many chasers quickly returned to the U.S., while others were assigned to various post-war duties. SC 137 was initially slated to be part of a twelve-chaser force to be sent to northern Russia to assist with the withdrawal of U.S. troops from the region during the turmoil of the Russian Revolution. SC 137 therefore sailed to Inverness, Scotland with eleven other chasers, to prepare for duties in the White Sea. However the chaser force for this tour of duty was reduced to a single unit, and SC 137 proceeded back to the U.S., stopping at the same ports as on the initial crossing. SC 137 was placed out of commission at Newark, NJ, and was sold on 6 June 1921.