The Victory at Sea 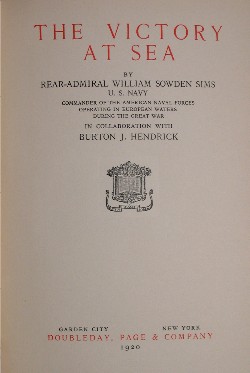 The Pulitzer prize-winning account of the U.S. Navy's part in World War One by Admiral Sims, in collaboration with Burton J. Hendrick.

A lengthy but accessible and engaging book written in the first person (although presumably Mr. Hendrick played a substantial role in the actual writing of the manuscript). Admiral Sims describes his service in WWI, as Commander of American Naval Forces Operating in European Waters.

Sims' work includes a full chapter on the American subchasers, Chapter VI, "American College Boys and Subchasers," in which he remarks on the role of the chasers in the war strategy. He offers a glowing account not only of the vessels and their role in the war, but of the officers and crews of the chasers, and their remarkable service.

Perhaps one of the best reasons to hold the chasers in high esteem is that Admiral Sims did. He showed strong support for the vessels, noting that had the war not ended as quickly as it did, the chasers would certainly have played an increasingly important role.

Available online from used book sellers at around $10 to $20.