The Splinter Fleet of the Otranto Barrage 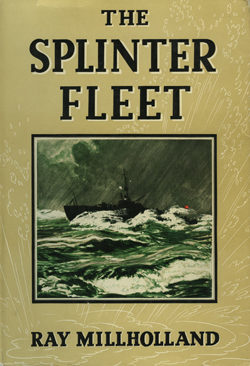 Millholland tells of his experiences as chief engineer of a sub chaser in WWI. This is an entertaining book, written in the old "spinning a yarn" style, complete with bravado and exaggeration -- but is a good read nonetheless. His chaser, which he mysteriously refers to as "1X4" (it is SC 124; and later he transfers to SC 225), takes the journey to Bermuda, the Azores, and ultimately to Corfu, where he and the other chasers are stationed in American Bay, serving on the Otranto Barrage line.

This is more like a novel than Nutting's Cinderellas, (which is more of a collection of stories) covering his tour of duty from start to finish, and providing a lot more of the details of what it was like to serve aboard a chaser in the engine room. He tells of the constant need for engine service, the rare opportunities to overhaul the engines on account of the relentless need to be on duty, and the heroic efforts of his team to keep the engines running anyway; and he gives full-throttle accounts of chaser duty including the engagement at Durazzo on 2 October 1918.

One might read this account with a degree of skepticism, just as with Cinderellas (which he credits as one of his sources). But after all, this is entertainment, not hard facts and history.

The book suffers many of the same weaknesses as Nutting's: photo attributions are mostly missing, footnotes are slim, and source references are made only in the form of general attribution. Still, the sense of the experience of an engineer on a chaser comes through vividly, and the book earns its place on the must read list.