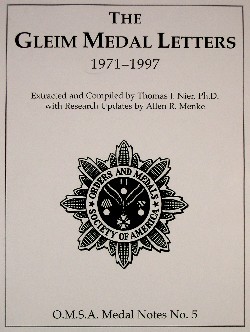 Colonel Albert F. Gleim spent almost three decades studying U.S. medals, and collected correspondence during the course of his research. In addition to hunting for source materials on medals, Gleim collected reports of different types of medals from the field, and over time developed an extensive set of letters discussing medal types, manufacturers, authenticity and so on.

After Col. Gleim's death in 1997, his notes and letters were researched and compiled by Nier and Menke, and published by the Orders and Medals Society of America as The Gleim Medal Letters 1971-1997.

His work on the Victory medals of WWI and the associated Navy service clasps includes descriptions of the medals, the clasps, and research notes on identifying authentic and fake medals and clasps.

The book formed a research source for Alexander Laslo's treatment of the Victory medals in The Interallied Victory Medals of World War I, and thus is of great interest to anyone interested in acquiring authentic Subchaser clasps. (See the Subchaser.org notes on one of the fake Subchaser clasps that turns up on eBay a lot, the so-called "Type II.")

The print quality is challenging. It appears to be shot from pasted-up sets of actual typed letters and charts, and much of the type is very small and blotchy. Moreover the content is often presented in a bunch of little chunks on the page, not always flowing clearly from one piece to the next. But the alternative is - well, no alternative that I can find, so it's a good thing these letters were preserved, and the book is well worth the cover price.

The Gleim Medal Letters is sold by OMSA, Cover price: $25