Our Navy at War 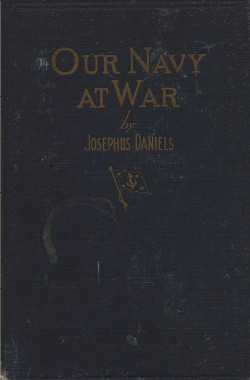 This is an account of the Navy's role in the war, by Josephus Daniels, Secretary of the Navy in the Wilson administration.

Daniels covers a number of topics of interest to those studying the chasers, including the mine sweeping operations in the North Sea following the war, coastal patrols, and so on. There is one chapter devoted to the subchasers, which reads rather like a short version of the chapter on the chasers in Sims' The Victory at Sea, in that both Sims and Daniels express admiration for the job of the chasers and dwell on the Durazzo engagement of 2 October 1918 as a banner moment for the chasers.

The book does provide some good details on the range of service provided by the chasers, including a summary of the duties of the chasers in areas other than in Europe, such as service along the Atlantic coast and along the coast of Alaska.

There is an interesting aerial photo of American Bay, but it isn't a very good reproduction. It looks as if someone drew over the shapes of the vessels - maybe because the image was too faint for printing - so the picture is kind of a weird combination of photo and drawing.

Available online at used book sellers for $30 or so.