The Yankee Mining Squadron, or, Laying in the North Sea Mine Barrage 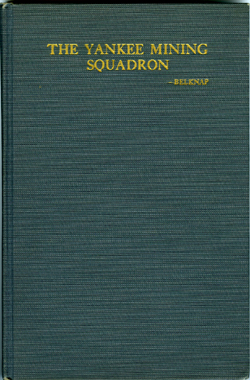 This is Captain Belknap's account of laying the mine barrage across the North Sea from the Orkney Islands to Norway, an impressive project intended to bottle up enemy U-boats, denying them access to open ocean. He tells the story from start to finish, describing the mine base at Inverness, the process of laying mines, and the challenges inherent in such a large-scale undertaking. The writing style is straightforward, intended for a general audience.

Particularly interesting is his description of the American Mark VI mine, designed with an internal depth-setting mechanism, and a set of wheels on the anchor to allow it to be rolled off a track on the mine layer. There are plenty of good photos and illustrations, including diagrams of the mine layers, formations for deploying the mines, and the design of the minefields themselves.

The connection to subchasers - not treated in this book - comes later on, in the post-war minesweeping operations, in which subchasers followed the sweepers to shoot with rifle fire any mines that floated to the surface. But understanding the design of the mine fields and the process of mine laying is useful in understanding the monumental task of the mine sweepers and chasers involved in the sweeping operations.

Available from used book sellers online for $40 or so. Occasionally a copy shows up on eBay.