Charles A. Post served on SC 40 in the Minesweeping Division, clearing the North Sea mine barrage after the war. This is an excerpt from his account, "Navy Life Aboard the SC 40." The typescript was prepared by his nephew, Gerald N. Aikman. Thanks to Mr. Marvin G. Marshall (stepson of Charles Post) for submitting the typescript, and to Gene Post (son of Charles Post) for submiting the photos to the Subchaser Archives. 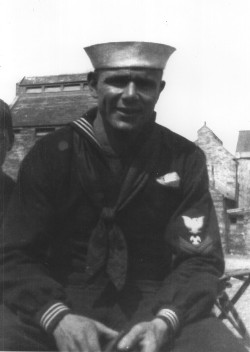 I enlisted in the Navy at Kansas City on May 5th, 1918, as a second class machinist and went to the Spent Boot Hill training camp at the Great Lakes Naval Base, training there one month. Then shipped to Camp Sims, Brooklyn, and was there three weeks. Went aboard the tanker, Frank H. Buck, for the trip overseas.

I counted 27 boats in the convoy - troop ships, cargo ships, and tankers. We had a destroyer escort for about four days out to sea as they had been having some trouble with German subs along the coast of the United States.

There were 70 of us sailors that they were shipping to Eng­land. Just before we went aboard the Buck, we were taken to a restaurant in Brooklyn. Two naval officers were standing by the door as we passed through. They said to order anything we wanted as it would be the last good meal we would get. How right they were! The Frank H. Buck was a dirty boat, with lousy chow, and I always remembered the last meal I had in the US.

Well, that old tanker was helping win the war; it was loaded to the limit as the top deck only cleared the water by about four feet and the waves would splash over it. We were assigned to a forward compartment that had four rows of bunks four bunks high, first deck down, and it was a stinking place to sleep. There was a superstructure just aft of the bridge that was loaded with large wooden crates that contained parts for aeroplanes and there was one crate in the middle that evidently had been lashed too tight as the small cable had crushed it and ruined two wings. They were taken out and thrown overboard. After an officer had inspected our forward quarters he said any of us boys using the lower bunks could sleep on deck if we wanted to.

About four days out of Brooklyn our noon meal was a bowl of bean soup mixed up with chopped meat rinds and fat meat and a hand­ful of crackers. I went up on deck and got rid of that mess. I was standing by the rail when a fellow came along and said, "Sailor, are you sick?" I said, "No, I had just dumped my dinner over the side." That was the nearest I ever came to being seasick.

That was how I became acquainted with Floyd Reauson. He said they had him working as a mess attendant and he would get me some­thing to eat. He was sleeping on the deck. I told him I had lo­cated a good place to sleep if we could use it. It was the big wooden crate that they had dumped the aeroplane parts out of. Well, we saw the Officer of the Deck and got permission to move in. The crate was about four feet wide, twenty feet long, and six feet high. We picked up our gear and set up housekeeping in it, using it until we left the tanker at Hull, England, about ten days later.

At Lands End, the southern end of England, the convoy of ships separated and we went along the southern coast of England, headed for the Channel. That was when I saw my first subchasers. We were off the coast about ten miles. One was tailing us and one was on each side of us, which relieved a lot of tension, as a lot of the new sailors were pretty nervous.

As we passed what the men on the ship called "Eming Light," the subchasers left us and went into Base #17 at Plymouth. The Frank H. Buck took aboard a pilot who took us up the English Chan­nel to the mouth of the Humber River and then up it a short distance to the town of Hull. It was a small harbor and there wasn't enough room for a tugboat to work our ship, so they winched it to the dock with powerful engines.

Several of us boys were standing by the rail when an officer on the bridge hollered, "Any of you landlubbers that wants to get his feet on land again can get off, but stay in the dockyard and be back aboard in ten minutes."

They unloaded everything topside, which provided quite a show and it was interesting to watch them clear the deck. Floyd Reauson and I cleaned out our sleeping quarters in the crate and after chow that evening everybody that wasn't in the ship's crew was marched over to an old building that resembled a church. We had our blank­ets and slept on cots.

We marched back to the ship in the morning. Had never realized it was so big. Unloaded, it stood about two stories out of the water. The dock was cluttered up with the things they had unloaded and they were pumping out the oil.

That was when I first got acquainted with a rope ladder. They had four hanging over the side. They are not bad things to climb if you have a man or two below you to hold them tight, other­wise it takes some practise.

There was a small boy selling papers on the dock. I bought one and asked the price. He said it was a penny. That was my first lesson about the value of English money. The value of a penny was about three US cents. I got in my money belt and gave him a nic­kel. He looked at it and said, "Thank you, laddee." Well, he short-changed me.

Later that morning they had roll call. We thought it was to see if any had jumped ship, but it turned out they were sorting out the men that were to be shipped out. An officer stepped out in front of us holding a handful of enlistment records. He said, "Now, as I call out the names of you machinists, step forward." Twenty men stepped out. "Pack your sea bags, clean up, dress blues, white hats, shine your shoes, and report back here in thirty min­utes." That was no problem. We reported back, stood inspection, threw our sea bags in a truck, and were on our way. We were on our way, but where none of us knew.

We were hauled to a railroad siding where there was a lone passenger car standing. We took our sea bags and got aboard. One of the men in the truck said, "Have a good ride, boys, and good luck." A Second Class Lieutenant climbed in and said, "Men, this will be our barracks for the next two or three days as we are going to Base #17." We were picked up by a slow freight train and were sidetracked again two miles from an air base. Got there about 5 PM and were set off on a side track again. About 6 PM a small bus came and took us in for chow. There were a few bombers and fighter planes lined up. Don't know where we were, but we were

pretty well down in England. Didn't have to stay in the car that night as we bunked down in what looked like an old church. They told us if we heard drums to get outside and scatter out.

The next morning we were picked up by a fast train, running 70 to 80 mph. Don't recall much of that trip, only that we were being switched to another train at the edge of a large city. We could only see the outline of it as there were no lights.

We had been riding in what they call a first class passenger car. Finally unloaded at Plymouth, Base #17 for subchasers. We were hauled to the base in trucks and were checked in. We were assigned to the second floor of a stone building. It didn't have anything in it but cots and, boy, was it a dilly: Double doors at each end were the only ventilation. Down at sea level, it was damp and cold, and fog drifted through at night.

Worked at odd jobs around base for about two weeks. Was de­tailed to a truck and went across to Devonport to pick up supplies for base. While there a sailor rode up on a motorcycle with a sidecar and asked the Chief if he had a man by the name of Post. Well, that was me so he told me to come on as three officers wanted to see me. I asked him if he knew what they wanted me for, but he said he didn't know what trouble I'd been in. Sailors always made things sound worse.

Back at the base we stopped in front of the Naval Office. He nodded at the door and said to go in there, so I went in. There were three officers and four machinists. The officers were looking over our records. One looked up and said that he would lake Post and Zapht. He told us to get our gear and report aboard the SC40 in one hour, and that he'd be there to welcome us aboard. 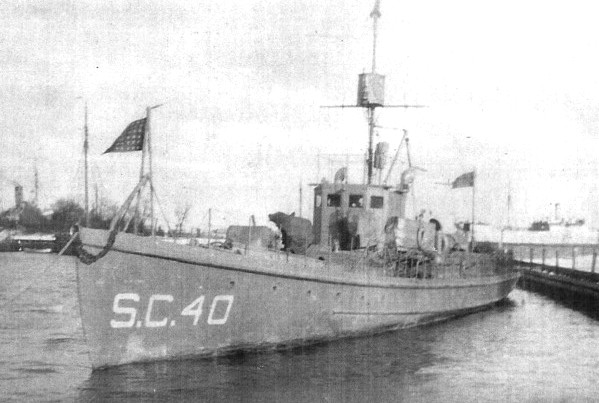 Well, we met him there. He said that his name was Laharke, First Lieutenant, and in command of the SC40. Zapht asked him if we slept up front or in back. He looked at us and laughed, then said, "Post, can you translate that?" I said that I thought that he meant up forward or aft. Laharke told us to go below and that our Chief Petty Officer was down below there playing poker. The Chief showed us where our bunks were. There were four bunks, two on each side. We had the top bunks. Lockers were below the lower bunks. Deck space was four feet by six feet. Didn't real­ize it at the time, but that was going to be my home for the next one-and-a-half years.

He said that anything lying on our bunks or in our lockers wouldn't be touched. He was a good Chief, 31 years old, and had a wife and child in the US. He said his name was "Pop" Elliot and for us not to call him "Chief," "For I'm not a Mohawk Indian." He and I spent a lot of our shore leave time in the engine room. I think this had something to do with my being promoted to Chief Petty Officer later. It didn't take long to get acquainted with the crew, either, as we couldn't get out of our bunks without step­ping on someone... 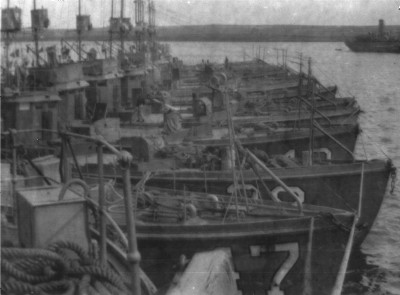