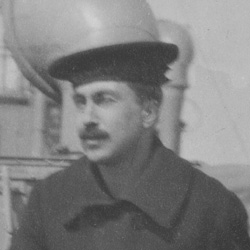 Corbin Z. Demarest served as Chief Machinist's Mate on SC 354 during the Northern Russia Expedition and thereafter. This photo set shows views/documents from his service.

Following the war, a unit of submarine chasers was assigned to service in the White Sea, to support the military withdrawal of U.S. troops in the region. Initially twelve chasers were prepared for ths service, but the number was reduced to three. SC 354, under the command of Lt. George S. Dole, served as unit leader. Also in the Northern Russia Expedition were three Eagle boats, USS Sacramento, USS Yankton and flagship USS Des Moines

In July 1919 the chasers of the Northern Russia Expedition returned, and took part in ongoing mine sweeping operations in the North Sea. SC 354 reached the United States in November 1919, a full year after the end of the war.

Thanks to Jim and Lynn Brace for sending in the images from Corbin Demarest's collection.