About 2:30 Heckendorn sighted an object about 4 miles away that proved to be a sub running awash – so Alpine declares. At the same time the Parker shot on full speed to investigate and we after her as fast as our puny engines would push us. General Quarters were enjoyed during the mad rush. The Parker pulled off slightly to the SW when she got way ahead of us suddenly changed her course and let go a small arsenal of depth charges then laid to to await results. I guess she didn’t bring up oil.

We put down tubes & started listening as soon as danger from depth bombs was past. Heard nothing then but after we had started our running patrol again we got contact with a real sub. As the time passed the trail got hotter til it seemed at one time as tho’ he was coming right between us & 98. Just as we got ready for attack 98’s Mason tube got stuck bent & busted so that laid us up and then the chief run out of air when the sub sounded clearest. Curses. Finally we got a 3rd perfect fix & were off for the attack black flag flying straight astern from the mast.

The attack came at 4:50. Steamed at full speed for 3 minutes then each boat let him have 2 light barrages – bombs from the stern – one heavy – the Y gun – and another light. Our Y gun bombs seemed almost too close. They ripped open the sea and set it a’ splitting for yards around. The water jumped up as big as a Barnum & Bailey circus billboard from the “shallows” and the “deep” let out groans that shook the boat. One would say that was enuff to sink a fleet of subs.

As soon as possible we put down our tubes and could hear nothing. Did we get him? The water was something over a mile deep on the “battleground” so maybe oil couldn’t come up. Late at night we ran thru fields of light oil & big ones. Whether from “Fritz” or not one can never tell. If he got away he was going some because we heard never a sound & our attack didn’t take long enough to cover a getaway. Of course we will probably get no credit as we lack any proof but a man has a right to a personal feeling of satisfaction that there is one less “helldiver” to dodge.

Late in the PM we started running patrol again intending to keep it up all nite but at 9:00 P[arker] signaled to call it off & start drifting at 10:00. Was glad of it as half speed at nite on a rough sea and a black nite is no fun. It was a black nite. I had the wheel from 8:00-10:00 and could barely see the forward wireless stay – the “jack stay.” We had to have all the windows open and the hard spray was sieving in at every jump, not a star even in the sky to light an inky landscape. Had queer dreams at nite as every nite at sea, as it’s practically impossible to sleep for the rolling & pitching. One minute you’re ease & then you ain’t.

From the personal diary of Ward Weller, crewman on submarine chaser SC 36. Thanks to his granddaughter Jayne Rankin for submitting the transcription and the image scan to The Subchaser Archives. 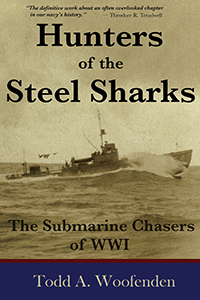 Hunters of the Steel Sharks: The Submarine Chasers of WWI
Woofenden, 2006. Softcover, 224 pages. $23.95. Available on Amazon.com

In 1918, a war time fleet of 303 U.S. submarine chasers formed a new offensive against the enemy, armed with depth charges, deck guns and an array of new, top secret submarine detection and pursuit devices.

These miniature wooden war ships, the smallest commissioned vessels in the American navy, were the first major deployment mechanism for early antisubmarine warfare equipment, and were remarkable in their capabilities and service: Chasers crossed the Atlantic Ocean on their own power; performed submarine hunts and attacks from bases in Plymouth, Queenstown (Cobh) and Corfu; assisted with post-war diplomacy along the eastern shore of the Adriatic Sea; helped facilitate troop evacuation in northern Russia; and participated in the clearing of the North Sea mine barrage.

This is the history of the submarine chasers of the Great War, extensively illustrated with period photographs and diagrams, and rich with personal anecdotes, an up-close account of the early days of ASW based on rare, unpublished documents.